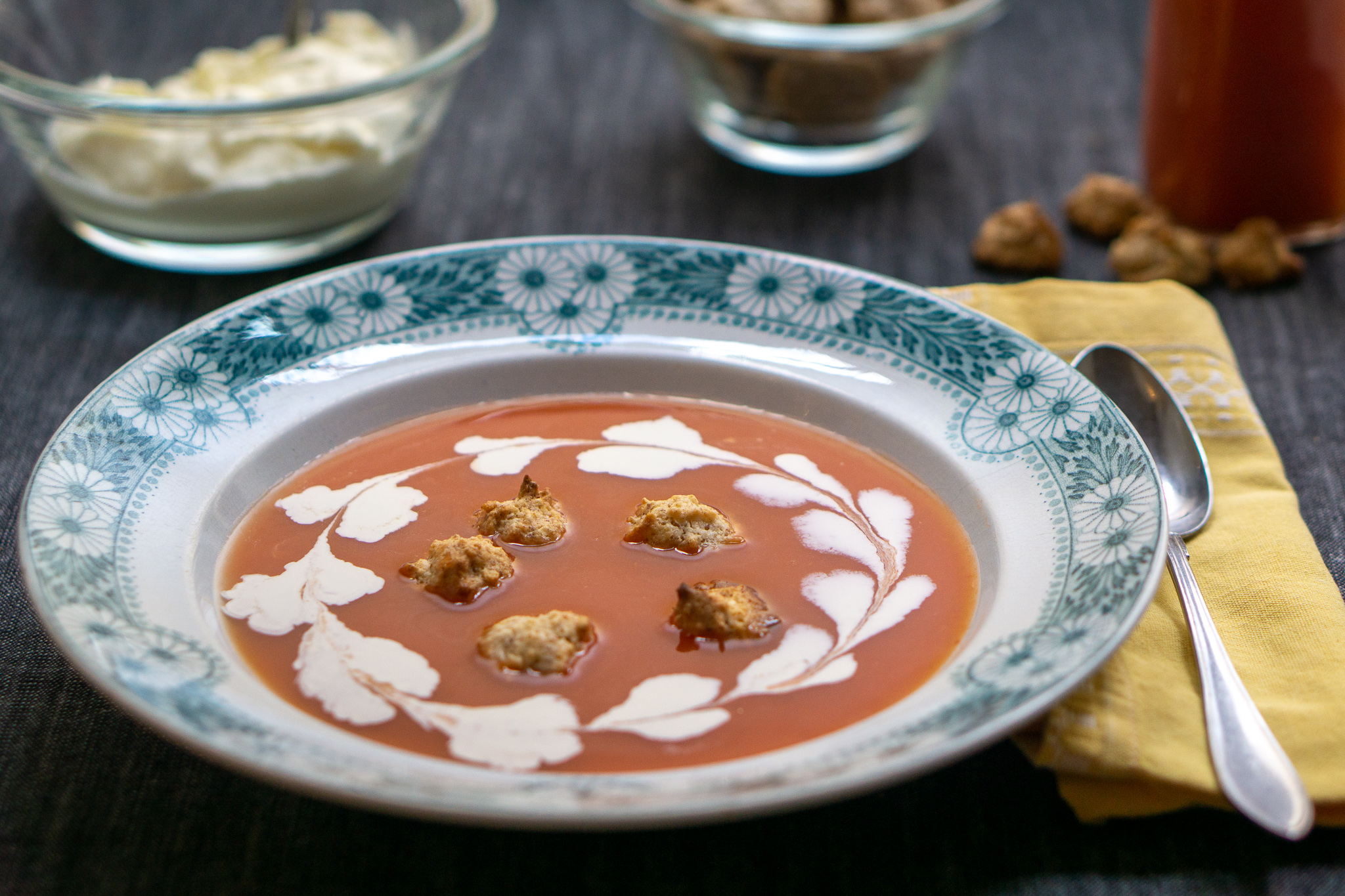 Not all dishes get the attention they deserve. Because what happened to real, homemade rosehip soup?

Maybe Swedes can blame the ready-made packs of soup for injuring the memory of our sensitive tastebuds. But the underestimated rosehips have their main fan base in the Nordic countries. Food historian Jan-Öjvind Swahn notes in Mathistorisk Uppslagsbok that internationally, rosehip soup is “a completely unknown delicacy”—the rosehips are used mostly for candy or eau-de-vie. “The rosehip soup research seems to still be in its infancy”, he says.

Well, my friends, fear not! Let’s see what we can do about the lacking roseship soup research.

The history of Swedish rosehip soup

Most likely, rosehip soup has been enjoyed for a very long time in Sweden. However, the oldest Swedish recipe I’ve found is from Maria Elzberg’s cookbook from 1751. This -såppa lets the rosehips cook in water with bread until they turn into mush. Then the rosehips are pressed through a sieve and raisins, sugar, succade, and—of course—a bottle of French wine. All of this is served with toasted bread. Fancy.

When Björklund barely 100 years later (1847) publishes her cookbook, she excludes the raisin and wine, but keeps lemon and cinnamon for flavoring and thickens the soup with potato starch. This recipe is very close to today’s standard recipe.

And maybe Björklund is a bit before her time. Many of the later recipes during the 1800s happily add bread, wine, raisins to the poor rosehips, 18th century-style. For example, Anna Maria Zetterstrand (1863) has a more old-fashioned recipe than Björklund, where she also suggests gooseberry cordial as a substitute for the wine. As an alternative recipe, she suggests that you boil the rosehips with oat flakes and dried cherries or pear slices. Maybe another time… The interesting thing about Zetterstrand’s recipe is her addition to the serving: she uses sugary biscuits as an alternative to toasted wheat bread. The garnish is improving.

Someone who turns against the habit of adding “cinnamon, lemon, almond, and more” is Mathilda Langlet. She reckons that you should be careful to “cover the peculiar fresh, if somewhat astringent, flavor”. For this reason, she thinks you can discard the if you so wish.

If we’re talking about style, you can of course fetch the high-stemmed glasses and serve cold rosehip soup in them—maybe even with a dash of champagne, instead of the historical French wine?

But, if we stick to the accessories. Langlet claims that “in some places”, people add whipped cream in the soup, something that “adds a pleasant contrast” to the tartness of the rosehips. Dear Hagdahl continues on the same track and recommends that the rosehip soup (no wine, but raisins) is served with almond slivers, whipped cream, and macaroons. Somewhat later, Prinsessornas kokbok by Jenny Åkerström suggests Madeira instead of wine, and serve the soup with biscuits in vanilla cream.

The habit of adding cream seems to have appeared in the late 1800s. When it comes to the crunchy garnish, it seems to have evolved from wheat bread (preferably with butter, sugar, and cinnamon) in the 1700s to sugary biscuits during the 1800s. Hagdahl’s suggestion of macaroons would be considered close to today’s almond macaroons, who are a cross between coconut macaroons and French almond macarons.

When do we eat rosehips soup?

Whenever you want, of course. But as rosehips ripen during the autumn, it is no wonder that rosehip soup often is made at that time. After all, fresh rosehips give a certain flavor.

But, apparently, rosehip soup also seems to be connected to Easter. The reason seems to be that it is “read as the Savior’s blood”. How appetizing. In Svenska Dagbladet in 1886, an article refers to rosehip soup as a standard dish for the Good Friday supper, “if you stick to old traditions”. As course, you’d be served salmon, and the dessert would be rosehip soup. The custom seems to have survived for at least some time in the 20th century, as the reference returns, for example in 1904. In 1978, the food writer Hiram expresses her surprise of learning of this and is then told by a newspaper reader that the rosehip soup had been part of the reader’s family’s Easter traditions at least since the 1820s. In Svenska Dagbladet, the rosehip soup is mentioned in connection with Easter at least well into the 50s.

So what rosehips can be picked?

Picked, and, more importantly, eaten. An article from 1918 in Svenska Dagbladet claims that the most suitable rosehips are of the family Rosa canina, with fruits that are late to ripen, hard and shiny. According to the Swedish Giftinformationscentralen, all rosehips “from different Rosa-species are non-harmful”. So, at least all Swedish rosehips are safe to eat; they just vary in how tasty they are. However, I do not know about all international rosehips—please do check with someone who knows in your area, or buy rosehips powder to make the soup.

To clean, or not to clean?

Then we come to the big question of the seeds. Most of the older recipes I’ve seen don’t mention them at all. Maybe they assume that every self-respecting housewife the rosehips before they are dried.

But maybe it is that thought—of spending an evening de-seeding rosehips—that have made the eating of homemade rosehip soup such a relatively limited pleasure. Also, you’ll have to fidget and fight with the little hairs that, (to use Iduns hjälpreda’s nice wording) “cause an unpleasant and rather long irritation of the skin and itch”. And as you know, the result of all the hard work will disappear very quickly.

So, why spend so much time battling the seeds? If you don’t (in some extremely laborous way) intend to skin the rosehips before you dry them, you still don’t get away from some waste when they are forced through a sieve.

There can even be some benefits to keeping the seeds. An article from Svenska Dagbladet from 1918 lets the seeds boil with the rosehips, as it gives the soup “a more pronounced aroma of vanilla”. That the seeds add a vanilla flavor is echoed by Iduns hjälpreda from 1893, where rosehips are used to make a vanilla-flavored drink, or (1899) a vanilla extract.

If we look at more modern sources, TV chef Per Morberg first cleans the rosehips and then dries them before mixing them to flour—then he can finally make a rosehip soup. This process seems unnecessarily long if you’re making the soup straight away. Christer Lingström and Marianne Sandberg in Det köket clean the rosehips and dry them at 50 degrees (125 degrees Fahrenheit) for about 3 hours.

In the more efficient (or realist?) corner of the arena, we have Karoline Jönsson, who in Det gröna uses whole rosehips that are not de-seeded, whether they are fresh or dry. (She dries the whole rosehips at 70-90 degrees (155-195 degrees Fahrenheit) for about 5 hours.) Both Jönsson och the sisters Eisenman recommend that you remove the stalks and receptacles. Fair enough.

Rosehip soup demand any exact proportions—it is a matter of taste and supply. If you want to fidget with the seeds for a small eternity, go ahead. However, I’ve never noticed that the soup would itch despite me boiling the rosehips with the seeds. If you don’t have any fresh rosehips, you can, of course, use a similar amount of dried or frozen ones, or buy a rosehips flour.

Almond macaroons (of the addictive kind)

Honestly, almond macaroons are pretty addictive no matter what they are like. But most recipes I’ve seen mostly contain almond paste and egg. However, the childhood favorites from Cloetta’s blue pack also contain coconut and vanilla. These almond macaroons don’t spread much on the tray, so you can fit in a lot of them. If you want a slightly higher version, increase the amount of coconut to 1,5 dl (0,6 cups). I get about 80 macaroons out of this batch.

Rosehip soup can be served either warm or cold. Whipping cream—whipped or not—or a spoon of vanilla classic additions, but you could also try a dollop of crème fraîche to get some acidity.

For those who don’t have time to make almond macaroons, there are ready-made versions to buy. Otherwise, you can use some almond slivers, or a sweet biscuit or some other cookie.

When it comes to flavouring, the historical sources use cinnamon, lemon, and maybe some wine. Maybe something to test?

Those of you who want to avoid refined sugar can sweeten the soup with, for example, apple juice.