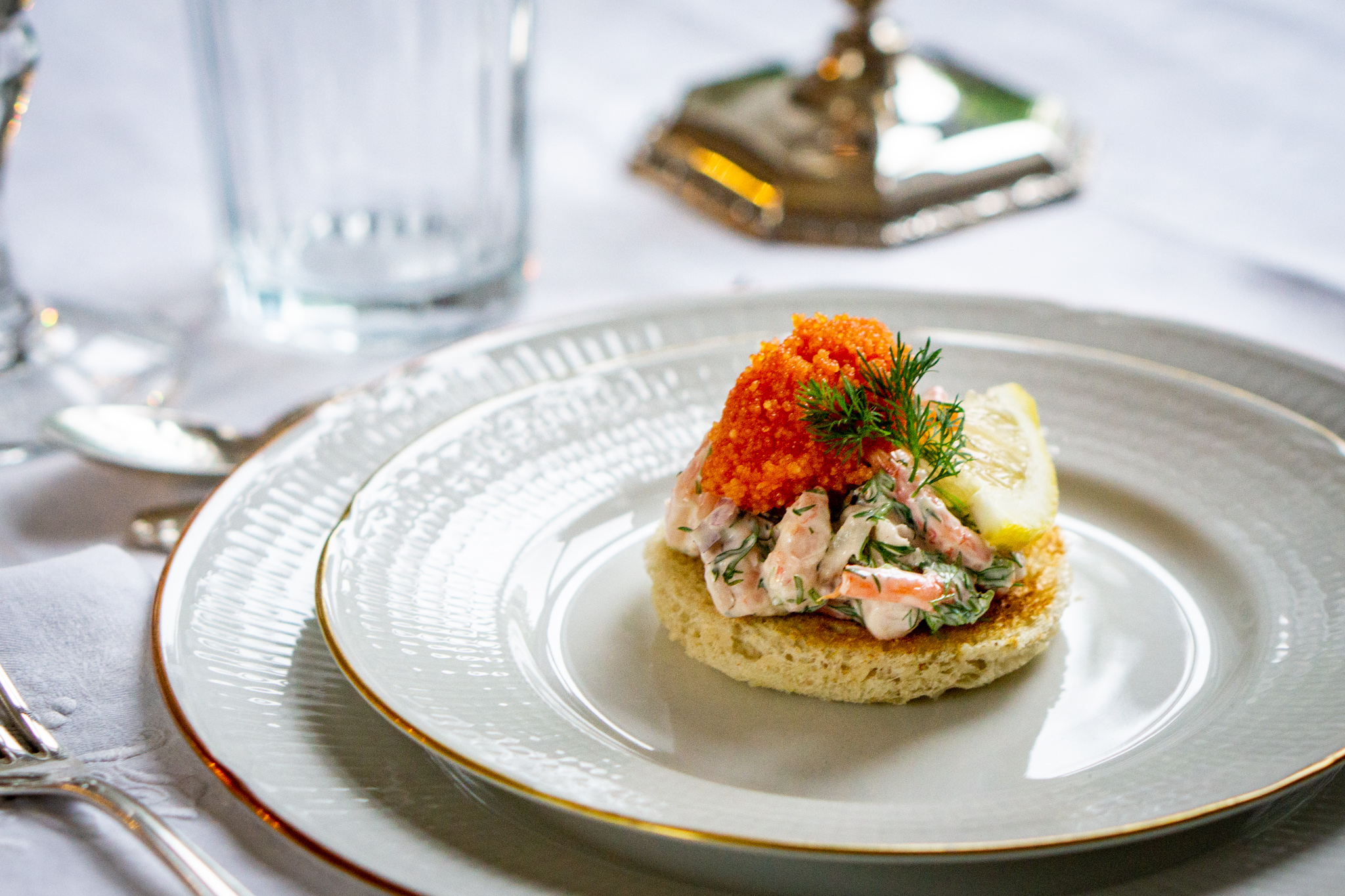 Toast Skagen is one of those dishes that quickly solve your problems. Does sorting through the restaurant menu cause anxiety? Order Toast Skagen. Don’t know what to cook your guests for New Years? Well, at least now the appetizer is sorted.

It may not be the most innovative choice, but if it is well-made, nobody can (or will!) complain.

Here’s how to make it:

The late chef, restaurateur, and cookbook writer Tore Wretman has had an enormous influence on the modern Swedish kitchen.

He was also a big fan of sailing, especially on his mahogany boat Salta Marina. And it is on that boat that this classic Swedish appetizer is born, at least according to journalist Staffan Heimerson, who got the origin story from Wretman’s wife Ewa:

Wretman and his crew participated in a competition in Skagen in the northernest part of Denmark in 1956. The wind disappeared, and with it, the chances of winning. The crew was disappointed. Wretman decided to cheer them up and checked what the galley had to offer: egg, oil, shrimps, some fish roe, and bread.

Wretman turned the egg and oil into mayonnaise, mixed it with the prawns, toasted the bread, and shaped the fish roe into small eggs.

As one of the crew members asked Wretman for the dish’s name, Wretman looked out over the glittering waters. He exclaimed:

“Oh, dear me — this is a typical Toast Skagen!”

On the other hand, the biography Tore Wretman — Maten och livet claims that the name of the dish came simply from Wretman pointing his finger on a map. I do prefer and give more weight to Wretman’s wife’s version, though.

According to Svenska Dagbladet, the dish was on Riche’s menu for the first time in 1958. In Richeboken, the restaurant shares its history, a few light-hearted anecdotes, and a handful of recipes. We’ll have to assume that the book’s recipe for Toast Skagen is similar to the dish on Riche‘s menu.

While the restaurant admits that the original version was simpler, their recipe is a typical modern version with a mix of shrimps, lemon juice, horseradish, mayonnaise, dill, salt, and white pepper. You place the composition on butter-fried white bread, top it with fish roe from Kalix, and garnish with lemon and dill. Though, specifying that the roe is from Kalix makes it a considerably more expensive dish.

Without promising too much, I’d say that Toast Skagen is one of the most popular appetizers among restaurants serving traditional Swedish food. A friend of the family always insists on ordering it as a main course when he visits Sweden. Nowadays, the name “Skagen” can also be used for other things, signaling a creamy shrimp mix of some kind — often mayonnaise-rich salads.

It has changed a bit since Wretman first created it, though. According to Heimerson, Wretman’s original version included dill and lemon, but according to Riche and a couple of other sources, both the dill and the lemon juice was an addition from Wretman’s cold-buffet manageress Karin Chädström. I’d say the dill and lemon are considered standard nowadays.

Some people (me included) like to add a little bit of chopped onion. I may have to reevaluate that decision after reading what chef Magnus Nilsson had to say about it in The Nordic Cookbook: “It makes the delicate dilly mix smell to me like standing in a dirty second-hand clothes store.” Oh well.

Nilsson is just as adamant about not including crème fraîche or any other dairy products to the mix. He thinks an acidic mayonnaise is the way to go and refuses to add vinegar or lemon juice to the mix. But, if you haven’t made the mayonnaise yourself, the easiest way to balance the acidity is with a touch of lemon juice, methinks.

Nilsson approves of the horseradish, though. Chef and restaurateur Erik Lallerstedt pioneered horseradish in the Skagen mix. The reason? According to Lallerstedt: “greed”. When he had a restaurant in Östermalmshallen, he added more mayonnaise to the mix. Otherwise, the expensive shrimps made it difficult to make a profit. To balance the extra fat, he added horseradish.

Then there are more unusual additions. The rebel Per Moberg adds both cognac and soured cream to his.

I am sure Wretman wouldn’t mind the later additions too much — he himself adjusted many recipes. For example, during his time at Riche, Tore Wretman tweaked the veal patties Wallenbergare by adding his special spice mix, épice Riche.

How to make a delicious Toast Skagen

The common way to serve this dish is as an appetizer but you can, of course, make extra big portions and turn it into the main course. Tore Wretman would maybe not have approved (and Magnus Nilsson definitely doesn’t!) but I like to add a little bit of red onion. Of course, for the best result, you make the mayonnaise yourself. The store-bought will give you a mighty fine result, too…

If you want to turn this dish into a real luxury, top it with fish roe from Kalix. A simpler red fish roe will taste great, too.

As said above, red onion is my own preference. It is more common to use horseradish instead. If you’re using horseradish, start by adding a very small amount and taste test.