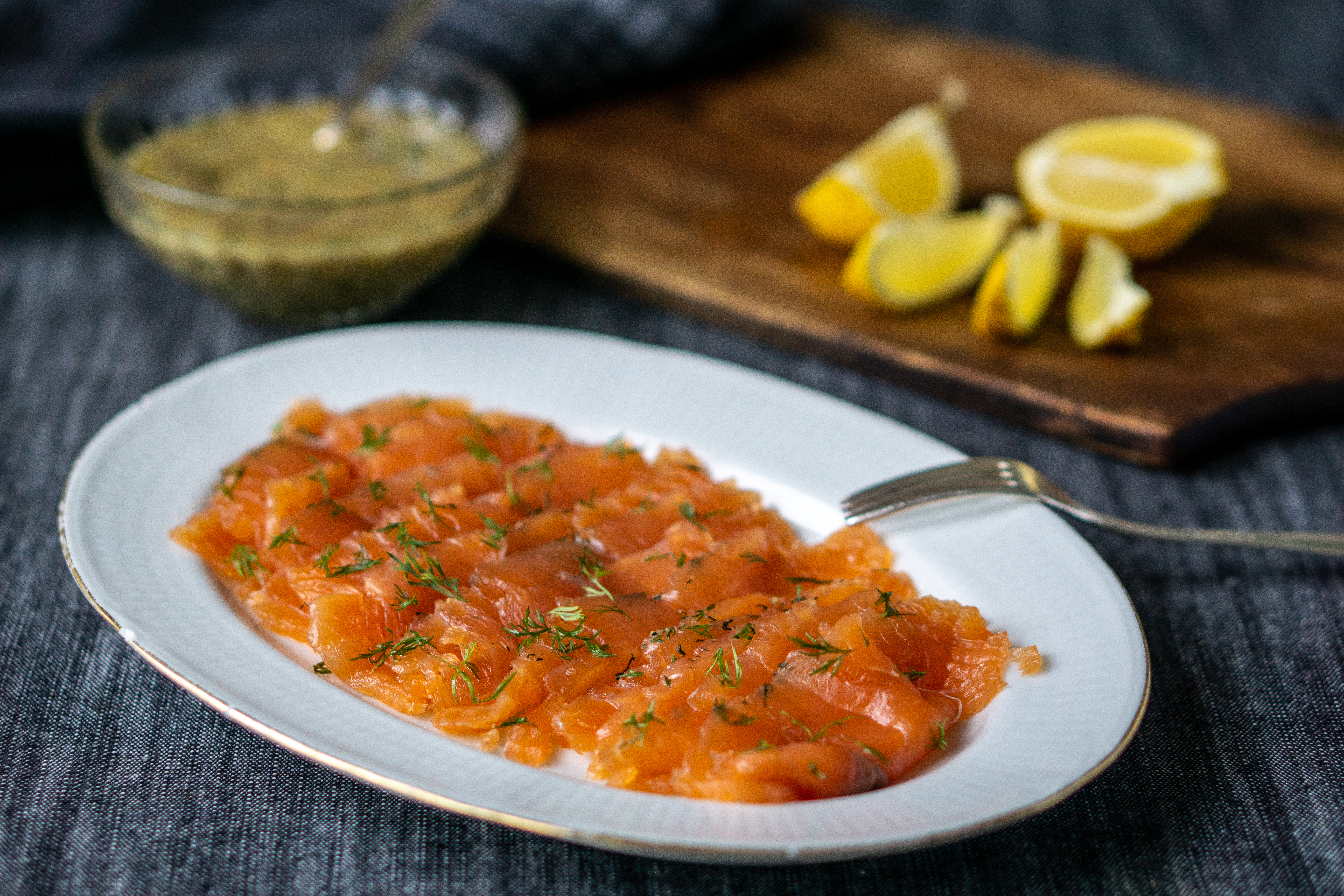 Swedes enjoy gravlax as an essential part of the festive Swedish smörgåsbord, such as Christmas, served with a sweet and strong mustard sauce. Although the cured fish mostly is eaten cold, you can enjoy it around the year. You can also serve it with potatoes as a standalone dish.

The history of gravlax in Sweden

As noted by Magnus Nilsson in The Nordic Cookbook, the name gravlax or gravad lax comes from the Swedish word that means “to bury”. Jan-Öjvind Swahn describes curing the salmon as a necessity back in the days where it was challenging to sell the salmon at the same time of year as it was caught. Instead, the fishermen dug a large hole that they clad with bark and moss, and then placed the fish in the hole, together with large amounts of salt. Then the hole was covered well from wild beasts until the waterways froze over and made it easy to bring the salmon to the market. The salt preserved the fish and kept it from rotting, although it did get smelly…

Swahn also notes that thanks to a French guest of the nobleman and politician Axel Oxenstierna, we know that Oxenstierna loved cured salmon, which he served cut in thin slices with a sauce with mustard, oil, and vinegar. That sounds like the way we serve it today — although this was in the 1640s. In 1642, Andreas Palmcron in Sundhetzens Speghel described how salmon is salted or smoked so it can be transported to areas without salmon. However, health-focused Palmcron considers the salted or smoked salmon a bit more difficult for the stomach to digest.

I had a hard time reading Gustafwa Björklund’s recommendations from 1847 without giggling. For example, she recommends that you get a female salmon and describes cutting up the salmon to the navel — salmons have navels..? Björklund suggests that you rub the salmon with saltpeter (sodium nitrate) and sugar, “one large handful of each for a large salmon”. Then you pour on “normal table salt” and sprinkle on dill, before placing the two salmon pieces against each other. The saltpeter must speed up the process considerably, as Björklund claims that it is ready to eat after just one hour.

Salmon is typically cured by rubbing a mixture of salt and sugar onto the salmon. Leif Mannerström has a slightly different approach and adds water and cognac to the curing mixture to ensure that it cures the salmon evenly. He lets the salmon cure for at least two days before he cuts off the skin, fries the skin, and serves it with the salmon cut in large pieces.

According to their Christmas cookbook, the highly esteemed restaurant Oaxen removes the skin to make the curing more even, as “the curing almost only happens from one side when the skin remains”. They also “over-cure” the salmon and then rinse off the curing brine to add the final flavors. Oaxen recommends vacuum packing the salmon, and if you don’t have access to a vacuum packer (I don’t), that you let the fish be “well wrapped and as airtight as possible”.

Magnus Nilsson lets his salmon cure for 24 hours, and then wash off the cure mix and lets it rest for another 24 hours, so the curing will become evener.

In Menu, Tore Wretman starts by rubbing a little bit of oil over the fish, and he also places a weight over the fish. For a slightly more brutal-sounding version, “Ane den Gamle” writes in Svenska Dagbladet in 1925 about his childhood’s gravlax, where the salmon was rubbed with its own blood as part of the curing process.

So, what about the mustard sauce?

In 1863, Anna-Maria Zetterstrand served her fish with a sauce of vinegar, oil, salt, pepper, and sugar. With his recipe for “Graflax — saumon au naturel à la suédoise”, Charles Emil Hagdahl’s 1896 cookbook returns to the mustard sauce that scared Oxenstierna’s guest in the 17th century, serving the fish with oil, vinegar, salt, pepper, mustard, and sugar.

The recipes in Prinsessornas kokbok from 1934 and Stora kokboken from 1946 use the same ingredients but recommend that you mix the sauce yourself on your plate. I’d advise against this, as it can take a bit of whisking to make the sauce into an emulsion.

Leif Mannerström adds red wine vinegar, soy sauce, and Worcestershire sauce to his, but most recipes have fewer ingredients. In The Nordic Cookbook, Magnus Nilsson prefers using brown sugar instead of white and tends to leave out the dill. Tore Wretman considers it part of the charm to mix the sauce at the table, and apart from the regular Swedish mustard, he also wants some “French dark estragon mustard”.

The importance of high food safety

Gravlax is delicious, but in extremely rare cases, botulinum toxin can develop in cured fish, and botulism can be fatal. Regardless, it is crucial to handle the fish correctly to avoid “normal” food poisoning. My recommendations:

I do not mean to deter you, but better safe than sorry.

How to make gravlax with dill and a mustard sauce

Ah, the classic combination! Gravlax together with a dollop of hovmästarsås is difficult to resist.

Cured salmon is easy to make and doesn’t require a lot of work. Please do pay attention to the discussion above on safety before you begin.

A strong and sweet mustard sauce. You’ll get the best result if the mustard and the oil are of the same temperature when you start. I enjoy using a roughly ground version of Swedish mustard and swapping white sugar for brown, but use whatever you have on hand. Both mustards in the ingredients list are already ground into thick pastes — if you use mustard seeds, you’ll need to taste-test and adjust the sweetening, vinegar, and oil until you have a nice flavor and consistency.

You can flavor the cured salmon however you like! Just skip the dill and add another flavor combination instead, once you’ve added the salt-and-sugar mixture to the salmon. Grated beetroot, or vodka and lemon, or ginger, lime, and chili? These are just a few of the examples that I’ve seen.

When it comes to the sauce, there really isn’t a way to turn it into a light-version—it is mayonnaise-like, but the acidity from the vinegar makes it less heavy.