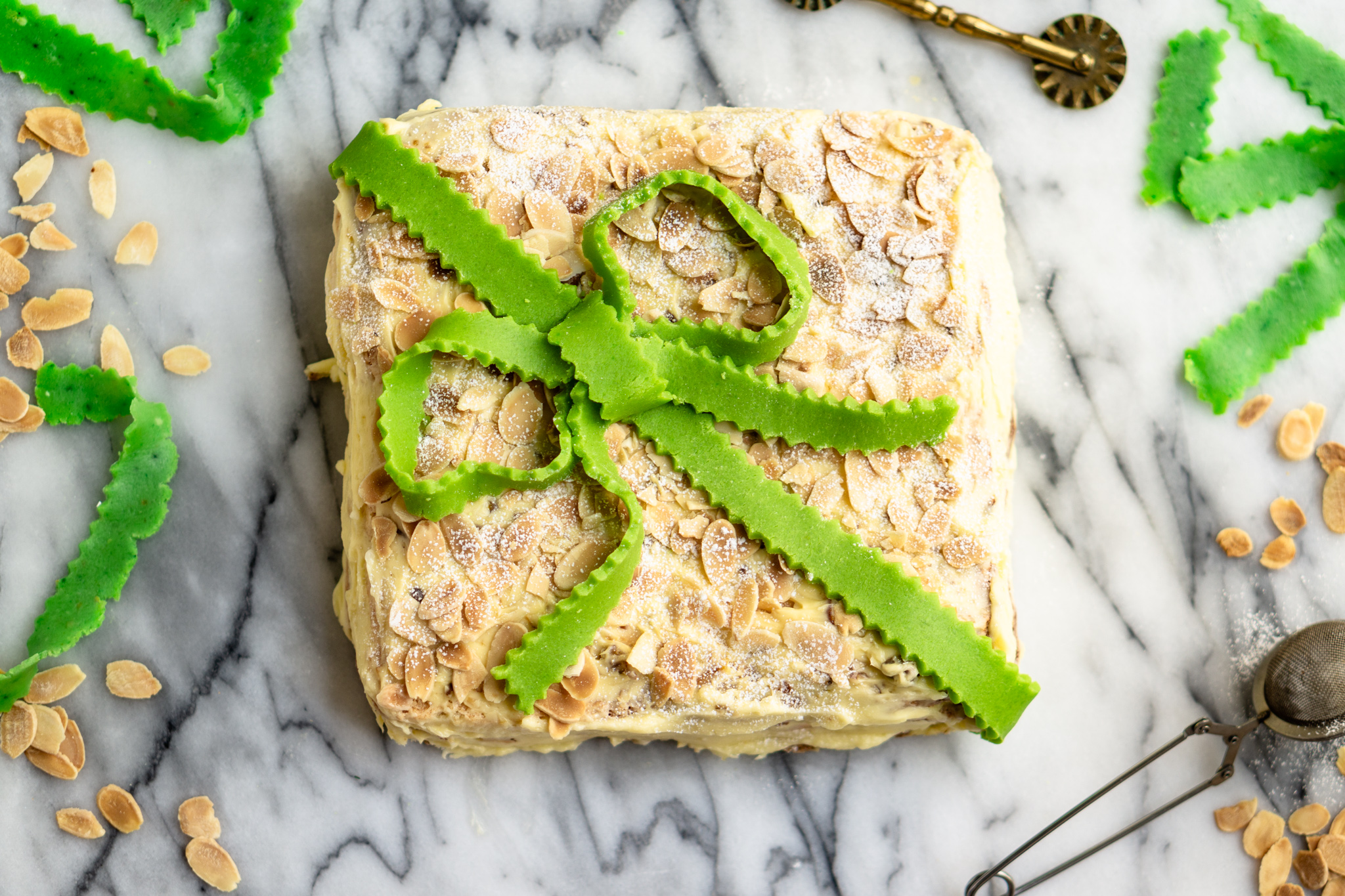 Sans rival means unrivaled. That’s a hard feat for a cake to live up to — but if one cake can do it, then maybe it is this one.

It even has a royal connection:

“At least once a year, the king gets a homebaked cake. It is a big, magnificent Sans Rival, which Taimi bakes for his birthday.”

Being the king’s cook comes with great responsibility. From the article in Svenska Dagbladet in 1976, it seems like Taimi Kivinen met the challenge with unfazed determination.

You probably need that when the number of guests for dinner changes from twelve to twenty-four. And now it is no longer a normal dinner but the king’s engagement dinner. And you hear about it at three o’clock on the same day.

When the interview was published, Carl XVI Gustaf had been the king of Sweden for three years and had recently married Silvia Sommerlath. The interview with self-taught Taimi Kivinen shares how the king is fond of simple dishes like raggmunkar, that the kitchen turns the palaces’ fruits into firm marmalade (the king doesn’t like the runny version, “and who does?” as the article says), and how the new queen tactfully hadn’t interfered with Kivinen’s choice of dishes.

Out of what sounds almost like maternal concern, Kivinen apparently wouldn’t offer the king much in terms of sweets or baked goods, but once a year, she would bake a Sans Rival cake for his birthday.

So, let’s take a look at this royal cake.

What is a Sans Rival cake?

To maximize the royal-ness of this cake, I used the recipe from Prinsessornas kokbok. The princesses in the cookbook name were cousins of king Carl XVI Gustaf’s grandfather. In the cookbook, Sans Rival is referred to as “our best cake”.

Among my cookbooks, Sans Rival appears first in the 30s, in the previously mentioned Prinsessornas kokbok in 1934. My research didn’t turn up much regarding the history of the cake. Svenska Dagbladet’s archive shows that Sans Rival was a common name both for boats and horses, for the same reason — you want a winner. Whether the cake was named after a victor or just to beat other cakes remains a mystery.

Contemporary cookbooks are more likely to feature a similar cake called Oscar II (we’ll get there, but not today). While it contains a lot of butter, Oscar II’s filling features more eggs. Sans Rival also seems to be commonly served in a square or rectangular shape, while Oscar is round.

How to make a Swedish Sans Rival cake

After having attempted the buttercreams in Prinsessornas kokbok and in Sju sorters kakor, I just have to recommend the latter method instead. I gave up on my crystalizing sugar syrup after the third attempt, and there wasn’t a discernable taste difference. However, if you are making the cake for someone gluten-intolerant, use potato starch or corn starch instead to thicken the buttercream.

I know this cake looks like a lot, but while it is time-consuming, it isn’t overly complex. It is best to make this cake the day before it is supposed to be eaten — or at least several hours.