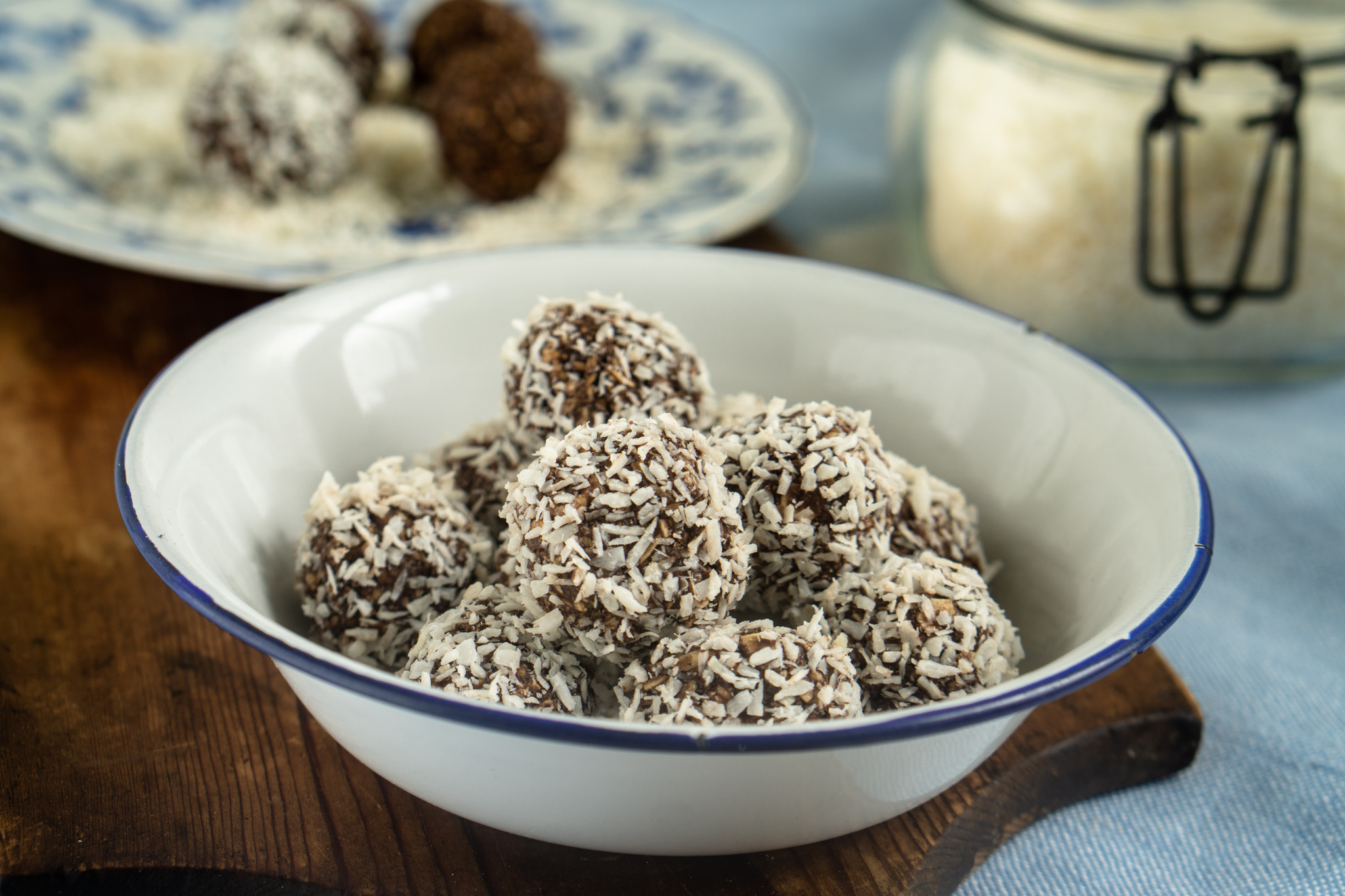 Few things in the kitchen scream “childhood!” as much as chocolate balls, or chokladbollar. They are simple and appropriately messy to make, making it a perfect baking project to do together with kids. Then, once the kids are a bit older, they’ll start to make chocolate balls on their own. It requires no oven, and therefore, no grown-ups…

My cookbook collection is a bit quiet when it comes to chocolate balls. I think I’ve figured out why.

If we go back to the beginning of the 20th century, the trend is towards biskvier (almond meringue cookies), piped cookies, and similar dainty cookies and cakes. At best, they show off craftsmanship, and in either case, some type of effort or skill. A simple —unbaked!— mix of oats and cacao would hardly have impressed the neighborhood ladies when they came for coffee.

Something that simple would instead be more appropriate for children. That’s how we see it in 1943 when Svenska Dagbladet features a predecessor to today’s chokladbollar (albeit with an old racist name). This version is aimed at kids, but here the ingredients are melted and stirred together in a saucepan, shaped into balls, and left to dry. Once they were dry, the balls are rolled in powdered sugar. Interestingly, they are also flavored with almond oil.

The same year — probably earlier, as Svenska Dagbladet’s article was in December, a Danish book called Opfindsomhed i en krisetid was published. It shares plenty of advice for what Danish households could do to make the food rationing last longer. Among the recipes, there’s a recipe for havregrynskugler, or oatmeal balls. In fact, it looks very similar to the one published in Svenska Dagbladet. In Denmark, oatmeal balls seems to have started as a treat for children, and stayed as a Christmas sweet. In Sweden, chocolate balls are simply for kids — but for kids of all ages…

How do you make chocolate balls?

Chocolate balls generally contain butter, cacao, sugar, and oatmeal that are stirred together to an even batter. It is common to add a little bit of cold coffee, water, or milk. The balls are rolled in desiccated coconut, or sometimes in pearl sugar. You can vary the ingredients as you wish — but olive oil didn’t work very well, if memory serves…

Chef Magnus Nilsson writes in The Nordic Baking Book that he’s not fond of adding liquid to the chocolate balls — the oats swell and the sugar becomes less crunchy. He suggests that those who want a slight coffee flavor add instant coffee powder instead. When it comes to liquids, do as you wish, though. The coffee flavor is considered crucial in Konditori & Bageri which is aimed at baker students. It turns out that chocolate balls are a favorite in cafés, and not just among the younger visitors.

How to make Swedish chocolate balls

I invite you to consider this recipe a foundation for experimentation. It might be a good idea to chew some chewing gum while you make these, or there’s a risk that there will be a lot of “taste testing”… You can of course swap the coffee for something more kids-friendly such as water — or go the other way and add a slight bit of coffee liqueur? For 25 balls:

The simple base invites endless experimentation — roasting the oatmeal, adding vanilla or almond essence, roasting the coconut flakes, adding coconut flakes to the batter, browning some of the butter, partly using muscovado sugar, rolling the balls in chopped nuts or sprinkles, roll in melted chocolate… I am sure you’ll find a favorite.

If you want a fancier version, blend the oatmeal in a mixer until it is smoother (but not a powder), and use powdered sugar instead of granulated sugar. Roll the balls in cacao powder.